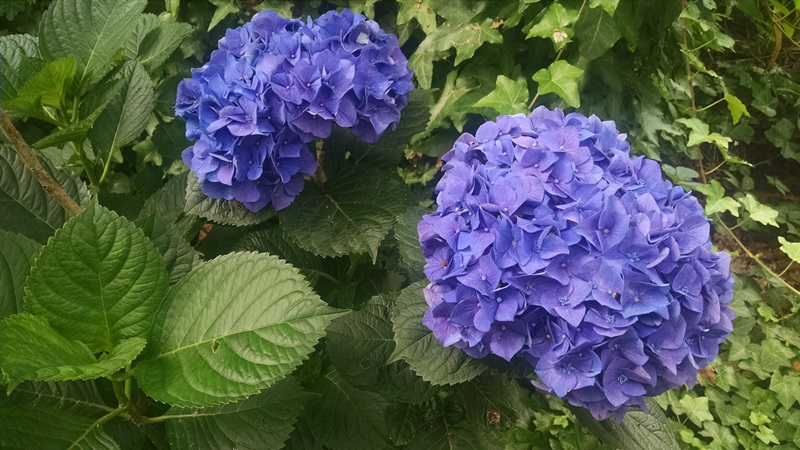 Today was another mild early summer day. Still hot if you are working outside but not nearly as bad as the last two weeks in Hattiesburg. Overcast for much of the day but we haven’t had rain here on the mountain. However, we have been hearing thunder south of us and we just got word from our friends coming home from the Philippines that they flew around Birmingham so long waiting for a break in the weather that they had to go back to Atlanta to take on more fuel and then try again. There’s a storm that has just been sitting over the Birmingham airport. We are still hearing some distant thunder. Hopefully they will get home soon.

Today we started by reviewing some of the estate paperwork and Max worked to clear some of the underbrush away from our house and Helen’s. We had so much spring rain that things are looking a little woolly.

There was a mimosa tree that had grown up in one of Helen’s front flower beds. Juno would not have been happy. She would be happy about the pretty hydrangeas in the back of the house. We also spent some time visiting with Randy and Debra before they had to go back to South Carolina. It was so good to spend some time with them again.

When we came back from Helen’s, Max was going to spray some week killer and set the sprayer down close to the garage door. Unfortunately it was also too close to a big rattlesnake. It never made a sound! He had to be removed from the premises and relocated. Nine rattles and a button. Scary. So after that little escapade we took a break from the outside work and went to Oneonta for lunch and more estate business. Stops at the bank, court house, funeral home and monument office. All went well and a few more items were marked off the list. Still seems we add more than we delete but we are making progress. Thanking the Lord for a safe, productive day.