Yesterday we went to the local doughnut store for breakfast and then tried a Tex-Mex restaurant recommended by Barb for late lunch. In between we did some hiking in the park. We also did a little shopping yesterday but otherwise it was a quiet day in the park, relaxing. It was a gray cloudy day so not a good day for pictures.

Today was suppose to be better but not so much. We had heavy fog this morning and light rain or drizzle most of the day. Fortunately for us it stopped while we were in Fredericksburg walking around town but started back about the time we were heading back to the truck to drive home. Light rain continues now and the fog is again thickening.

With the drizzle, we decided it was an indoor day and we went to Fredericksburg to tour the National Museum of the Pacific War. This is a very well done museum. We found our experience much like our experience at places like Pearl Harbor. It’s a very good experience, well done. We are glad we went. It isn’t something you can say is fun. It is very sobering. It is however, very important that we all remember our history. If we do not, we will repeat our mistakes and poor choices.

After the museum we had a great late (3:00) lunch at a local sports bar and grill. The sandwiches were great with a good German potato salad. We saw some more exotics that we have not photographed driving back to Kerrville, but the rain and low clouds kept us from getting any pictures. Maybe another day. Another good day in Texas.

The wind howled last night and kept us a wake part of the night. It was a cold north wind but had passed through by the time we got up this morning. It was again cold, at 31 degrees, but the sun was shining and it warmed up quickly again. It was 10 degrees cooler at 51 today so we decided to walk instead of ride bikes for exercise today.

We started the day by going to Mary’s Tacos, rated as serving the best breakfast taco in Kerrville. We have to agree they are very tasty, quite filling and very reasonably priced. We got two tacos for $5.00 including tip which we ate in the truck in the parking lot. There is no seating at Mary’s. We figured we could go back inside and order another if we were still hungry but decided one was enough. We will probably go back for another visit before we leave Kerrville.

After leaving Mary’s, we decided to drive through some of the subdivisions Ross took us through to see if we could get pictures of some of the exotic game animals here. Never thought we would be doing wildlife photography in Kerrville. We knew there were the usual whitetail deer, raccoons, etc, but endangered, and very endangered species – that surprised us. We don’t know all the facts but there are ranches that are raising these animals. Some were close to extinction a few years ago and now there are nice herds here in Texas. And surprising to us, because the ranches are raising these animals they are also allowed to hold hunts for people who have the money to pay. Lots of money. We might pay for a “safari” if it were a photography “safari”. Anyway, we found a number of animals, some of which were behind tall ranch fences and some who have escaped and are roaming freely in subdivisions. Can’t help but think that there are going to be problems in years to come with all these non-native species roaming around. Please do not flame us for this post. We are simply taking pictures of what we have found. We took some of the pictures in Kerrville and others as we drove down to Bandera and Medina. The drive to and from Bandera and Medina was pretty and interesting.

The drive from Medina to Kerrville on Texas highway 16 is listed as one of the three breathtaking drives you must take in the Hill Country. It is scenic and we are glad we made the drive but we think the people who rate these things have never made the drive up the crooked side of Pine Mountain. They grow apples in Medina and we stopped at one of the roadside stores and sampled a few apple items and bought some apple soft serve ice cream. We just couldn’t resist.

We also drove out to Ingram today where there is Stonehenge II, a somewhat faithful replica of the original Stonehenge in England. Interesting story.

After the visit to Ingram we came back to the park and while we were out walking spotted a few more exotics roaming one of the fields in the park. Fortunately we still had a camera with us. Of course there are many, many deer here in the park and we have gotten some good photos of them, too. Some right outside the front window. Another good day.

Today was another beautiful day in Kerrville. It was a little cool this morning at 31.5 degrees but it warmed up quickly and was a great day.

We really like this park and town. We decided today to change sites and move across the highway to an area with almost no road noise. The site we had was nice and closer to the river but after hiking some of the trails across the highway this morning we really like the portion of the park away from the river the best. So today was a laundry day and a moving day. It only took us about an hour to move. We also got in some hiking, geocaching and biking. Both of us got over 20,000 steps today. A nice relaxing day. 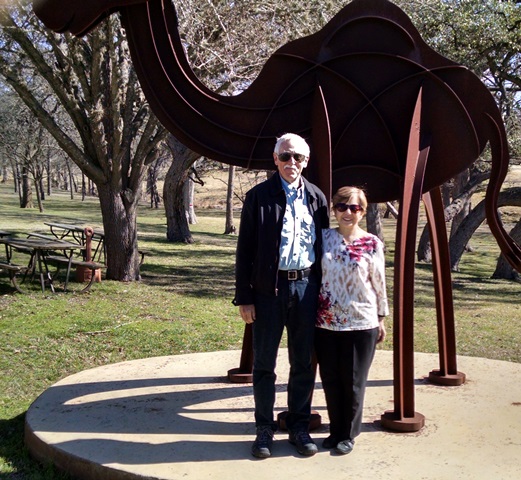 We had heavy rain overnight. The rain that was predicted for yesterday. So glad it was overnight and not during the day yesterday, and then today was another beautiful mild day.

This morning we went to church with Ross and Barb at Calvary Temple Church. The congregation was very welcoming. The contemporary music was very good and the guest speaker equally good. Ross was disappointed that we didn’t get to hear his pastor but we plan to listen to the stream next Sunday. The guest speaker was Dave Roever a Vietnam veteran, purple heart recipient and he has a full time ministry with wounded veterans, whether wounded physically or emotionally. It is called Operation Warrior RECONnect. He has an amazing testimony.

After service we had reservations as Camp Verde General Store and Restaurant. We were there early and had time to wander around in the general store. It’s not like Gibson’s from yesterday, in that they don’t have everything but they have some really nice things. Although tempted, our table for lunch came available just in time and we resisted any purchases. The original Camp Verde General Store established in 1857, was established to offer goods and services to the soldiers stationed at Fort Verde a mile to the west of the store. The camel sculptures on the property refer back to the US Army camel experiment at Fort Verde. Interesting. The grounds of the property are beautifully maintained and we had a fun time exploring prior to lunch. The restaurant is known for its reuben sandwich which we all ordered. It was very good as was the service we received. A fun time.

After lunch Ross and Barb needed to meet up with some friends who wanted some real estate advice from Ross. We went back to the campground and after our lunch settled a little took the opportunity to take the bikes out on the River Trail. What a grand time we had. We had a great ride in a great atmosphere. If we lived here we would want to ride the trail every day. It was heavily used today on this beautiful Sunday.

We still haven’t made it across the highway to the other section of this park to hike some of those trails but we have the rest of the week. It should be a good one.