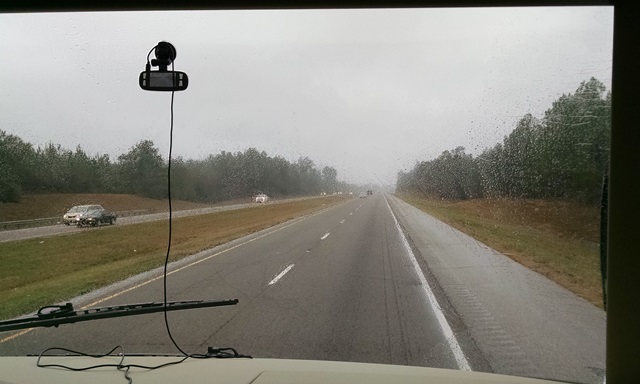 The last day of the year began with rain. It started raining sometime during the night and rained intermittently and never very heavy until around lunch. So, it was another gray day. The sun didn’t even think about showing itself today. It wasn’t as cold as predicted either. Our low was only about 40, so no problem with staying nice and warm. The generator didn’t cut on at all last night. It was about to cut on this morning when Anne gave it a little enticement by cutting on the tea kettle. We love our automatic start on the generator.

Camping World not opening until 11:00. We were only about 2.5 hours from there. Between the showers Max went across the street to grab us some breakfast. When we did get back on the interstate it was a wet drive. We kept seeing these South Carolina cars with all sorts of orange flags and banners and tiger tails

hanging out of the trunk. Wonder where they were going. Unfortunately for one of them who sped past us, Alabama law enforcement was giving them an unwanted welcome to our state a short way down the highway. Oh well, Mississippi may be doing the same to some Alabama fans. We were able to live stream the Lester Memorial UMC worship service while we were driving. In case you were wondering, Anne watched and Max just listened. Love our church and our pastor.

Yea, Camping World, not usually our favorite place. True to his word, Eric was there when we arrived and filled our propane tank. While we were at CW, they sold their last two bottles of RV antifreeze and had several more people come it hoping to purchase the same. We travel with our antifreeze this time of year. The low tonight here is 27 which doesn’t bother us, but tomorrow is predicted 23 in Gulf Shores so we will be using the propane furnace to keep the sewer bay and holding tanks from freezing tomorrow night. Our rear furnace is vented to blow warm air on the tanks and into the sewer bay. All should be good.

After CW, it was just a few miles on down to Foley to the Tanger Outlets. There is one store there where we are usually able to get much better deals on Merrill shoes/boots than any where else. We both found some boots on close out that were about half price. We may go back to check out the Eddie Bauer store. Today we were able to snag a last minute site at the state park so we headed on to Gulf Shores to check in. Our original reservation began on January 1 and we were planning to stay in Foley for the night but with the cold we decided we would really prefer to just go ahead and get in the park. Now we have all the 50amp power we want to power our fire place and heat pumps.

For dinner we went to Mikee’s Seafood, a well known restaurant in Gulf Shores and had some steamed Royal Red shrimp. Oh my, they were so good! We had been wanting some good seafood. Hope we can satisfy that craving several more times over the next few weeks.

Some of you have been praying for our second cousin Joshua for some time. He, at 13 years old, has a very rare brain and spinal cancer. He has done well the past couple of months. The family had a very good Christmas. However, at 12:30 this morning he was flown from Huntsville, his home, to Children’s Hospital in Birmingham,. They are still trying to determine if the current problems are related to disease progression or something else. Please be in prayer for the entire family.

It didn’t get as cold as predicted last night. We stayed above freezing. With the sun out this morning as we were doing our final load out, it felt rather nice. The weather service says it will be the last nice day for a while.

When we got up this morning a decision had to be made. Anne hasn’t been feeling well – cough, crud that’s going around – but this morning also had a low grade fever. Yesterday she thought she was better and we planned to go to Tuscaloosa to see Mama Ruby and then head south from there. We decided we just could run the risk of going for a visit. We also check the forecast. The weather service was still talking about slick roads from a glazing of ice tomorrow morning. So, since we were already loaded and we really didn’t want to start carrying things back inside, we decided to drive part way to Gulf Shores today. Since we were leaving from home, we drove I-65. That route takes us within a few blocks of Bass Pro Shop. We took that opportunity to stop and trade in some old socks for new. If you don’t know, Bass sales lifetime guarantee socks. When they wear out you simply return them for a new pair. We have been wearing these socks since we started preparing for our hike to be bottom of the Grand Canyon in 2011. We love walking in with old socks and out with new with no money out of the bank account.

We left Bass Pro Shop and headed on south. Our plan was to top off the diesel, DEF tank, and propane all of which were about ½ full. Since we can take care of all three at Flying J, that is where we stopped. However, today they had no one to pump the propane. It requires an individual license and no one working today had a license. (Seems like poor scheduling to us.) They suggested we go to Love’s, about a block away. We went to Love’s and their tank was “out of service.” The temperatures tomorrow night and all of next week in Gulf Shores will not be nearly as cold as north of here, but cold enough we have to have more propane. We called Camping World in Robertsdale and they say they will fill us up tomorrow. We certainly are hoping so.

We stopped for the night in Greenville, AL. Not because we couldn’t have driven further but we don’t have a reservation at the state park until Monday. We can’t get in early because someone else is on our site. We had planned to spend the night at Cracker Barrel (most of which allow overnight parking for RVs) and have supper and breakfast there. This one has RV parking spots, mostly empty, but has signs everywhere shouting “NO OVERNIGHT PARKING.” We just turned around in their parking lot and left. We stopped at the Tractor Supply about a block away to see if they had propane. They don’t. But as we were talking to the manager, a very nice young man, he said it would be fine if we stayed in their parking lot tonight. So instead of spending money at Cracker Barrel, other restaurants nearby got our business.

Our plan is to leave here in the morning, stop at Camping World, then head to the outlets in Foley. This is a very quiet location and we are toasty warm. We are back traveling in FRED again. All is good.

It was another cold morning, 29, but another sunny day. We worked all day finishing up business for the LOLs, paying their bills, etc. Max also took the worms to Newdul and had a short visit with Aunt Jean. Newdul loves his worms. Otherwise we loaded freezer and refrigerator – love our new residential refrigerator. However, it takes a while to move everything because now we can just move our items from the house to FRED without having to repackage or determine what is going to be left home. We do have to make decisions on the freezer but it is so much larger and we generally fill it up since we keep a full freezer at home. Still need to hem a pair of jeans and get some sleep. We start another adventure tomorrow. Please pray for our safety. The forecast is still changing and quite different depending on where you check. Praying for NO SNOW OR ICE on Sunday! Check on your neighbors and family during these next few days. Its going to be dangerously cold. 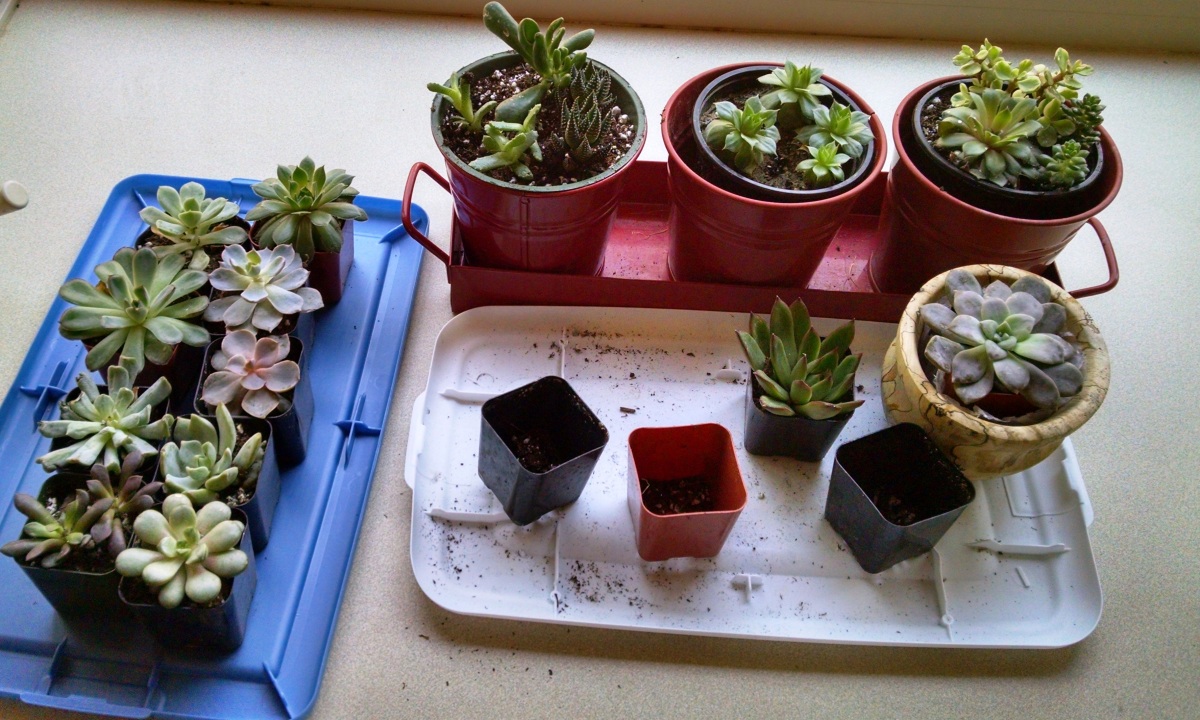 Do y’all get tired of us talking about the weather? We start out with that because it is the first thing we check in the mornings because it effects what we will do for the day. This morning was 30 degrees, not too cold but still below freezing. However, it didn’t seem quite so cold this morning because we had bright sunshine. Love it!!

We did some more work around the house this morning. We pulled some additional food items from the pantry to move to FRED. We also re-potted some of our succulents to get them ready for the trip south. Some we will have to leave for Juno to oversee for a few weeks.

Soon we had to get ready to go to Cullman. Max had another doctor appointment to see what would be recommended for his hand that has been giving him trouble for a few months. We saw an ortho/sports medicine MD. He is an old friend from Anne’s days of practicing in Cullman and we really trust him. He looked at the hand with ultrasound and found that there is a torn ligament that has never completely healed. He also has arthritis in the joints of his thumb. There are a number of options some of which we have already tried. Worse case, he could require surgery but we certainly want to avoid that. For starters, Max decided to use a splint and/or wraps. It’s not like he can totally stop using his right hand but he needs to limit the movement of the thumb. We will see how this goes for a few weeks and then consider other options if needed. Prayers appreciated. We also made a Walmart run, stopped at the Court House to take care of some business there, the medical supply store to pick up the splint, and to check on Helen and Juno. Since Anne hasn’t been feeling very well it seemed like a long day. Anyway, back home for dinner and relax. Thanks for checking in. Hopefully things will be more interesting in a few days when we are really “RVing With a Purpose”