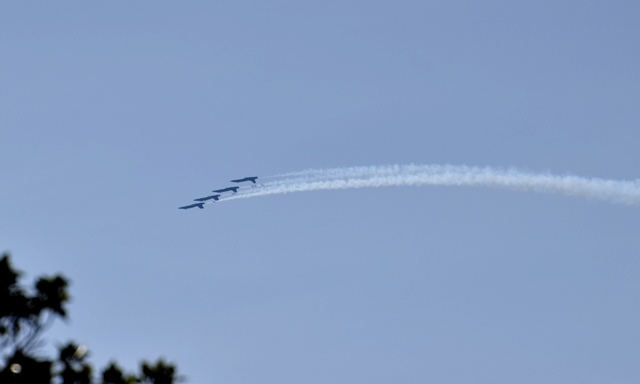 If you want to know how nice the weather is just look at every other day this week. Another awesome day. We are enjoying sitting outside in the afternoons after our walks.

We started the day with a nice walk. Then we continued to work down the to do list. We made good progress today. Unfortunately, other things were added to the list. Still we are pleased that the list is a little shorter this evening than it was this morning. Another LOL tax return was completed, more bills paid, reports submitted, orders placed. We have a new toy on the way. More about that later. We heard jets at 10:00 and remembered the air show is this weekend. We stepped outside and as expected we saw the Blue Angels arriving for the air show. They were flying in formation as they approached the airport. A few hours later they returned to the sky practicing for the show. We saw their homecoming show in 2014 when we were in Pensacola working the Gulf Breeze disaster rebuild. The Angels have done several shows here in Tuscaloosa and they usually make some runs right over Mom’s house. They flew over a number of times but none as low as they have done in the past. Wonder if they have new restrictions in place now. It will be interesting to see what they do tomorrow and then the days of the shows. Mom’s house really isn’t that close to the airport but we still got a nice show today.

While we were out taking photos of the Angels our next door neighbor on the other side came out with her twin boys. We had a nice visit. We took another nice walk on the greenway this evening and then enjoyed sitting outside reading. We just saw on the blog statistics that we have one viewer from China today. Wonder who that might be. Interesting. Thank you, God, for another good day to spend together.