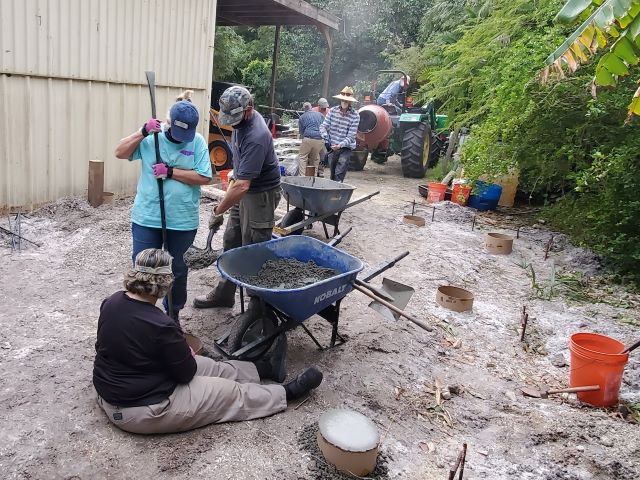 This week the entire team has worked very hard doing strenuous manual labor.  Sorry, we were very tired in the evenings and basically took showers and collapsed.  So, to catch you up:  Tuesday was another beautiful day but it was 39 degrees as we drove to work.  The cold front had arrived in south Florida.  We were all bundled up to start the work day but the sun and the strenuous work had us shedding layers by morning break.  We began the day with everyone back at the bamboo pressure treatment area, BPTA, (our highest priority task) taking down the remainder of the bamboo structure, cutting it up and hauling the pieces to the recycling area.  We then tackled digging out the French drain that ran beside the building.  It had to be removed in order to set the forms for the post footings for the new structure.  After getting all the demolition completed and debris cleared out, we divided up the team.  While some of us were working on the French drain at the bamboo treatment area, others built forms for the footings, and others began working in another area of the farm prepping and setting forms for a new slab for the seed dryer.  The building materials for the new bamboo pressure treatment area were also hauled to the site.

Wednesday morning it was all hands on deck at the BPTA to dig 12 holes for the post footings for the new structure.  We were all really surprised that we had all the holes dug by lunch.  What a team!  Then began the slow work of working with Elliott on the exact placement of the forms in the holes.  While Max, Anne, Ken and Vi worked on that portion of the project, Suzan and Kevin completed the forms for the slab for the seed dryer, and began work on emptying the storage container with Wanda and Janet. As usual, team leaders Greg and Karen were helping out everywhere.

Thursday was the big day.  Thursday morning we completed setting the footing forms and cleaning out the storage container.  We then got everything set up for the concrete.  Beginning about 2:30, we dumped 80 pound bags of concrete mix into the concrete mixer, added water and then transferred the concrete to wheelbarrows and shoveled it into the holes.  It was about 38 bags of concrete mix.  We complete the pour and finishing about 5:15.  What a week!  We thank God for safety and health.