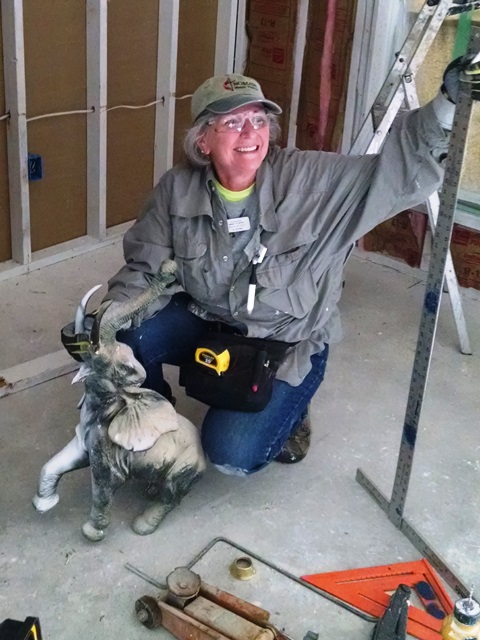 Today was not nearly as nice as yesterday. We had clouds all day but the rain held off. It was not nearly as warm today, 57 compared to yesterday’s 82. We have rain forecast for the next 10 days. Not the way we would like to start this project but maybe the forecast is wrong.

As is our custom, Max and Anne led devotion time today. We then decided on job assignments. We picked up tools from the tool room and headed out to three job sites. Anne, Gary, Nancy, Anne and Bob headed to Paula’s house in St. Amant where we were working on installing crown molding, doors, and making a repair in the kitchen ceiling. There was also lots of painters tape to remove. It was a challenge because the tape had been on for a week. We still have several rooms to go. Bob and his Anne hung one of the closet doors and will install the trim tomorrow. Nancy and Gary worked on the crown molding. It makes the room look so much better. Anne removed some of the kitchen ceiling tiles and has the area ready for drywall.

Larry and Jean worked with Charles again today. They were here last week working as a drop in and Darryl wanted them to finish up the insulation and underpinning they started then, since we probably won’t have weather for outside work the rest of the week. They completed that task mid-afternoon and joined Max’s team hanging drywall. Harry started the day breaking up the old, heavy (300 lb) castiron bath tub and the rest of the guys helped get it out of the house. The team then worked on taking down the decorative beams in the living room. After those two items were marked off the list everyone began hanging drywall. They made great progress today but there are still a lot of sheets to be installed.

This evening we were surprised by the Teresa and Linda, who work for the conference disaster team, with a pecan praline king cake with cream cheese filling. We talked about it this morning during our meeting when Teresa came by to greet us. Most of the team had never had king cake. Teresa say they don’t eat doughnuts when it’s king cake season (Mardis Gras) because the cakes are better then doughnuts. Now that was hard for us to believe. So we all had king cake tonight. It was very, very good. Now we understand. Thanks to Linda and Teresa.

We had a good start to the project today. Lots still to do but we will take it step by step.