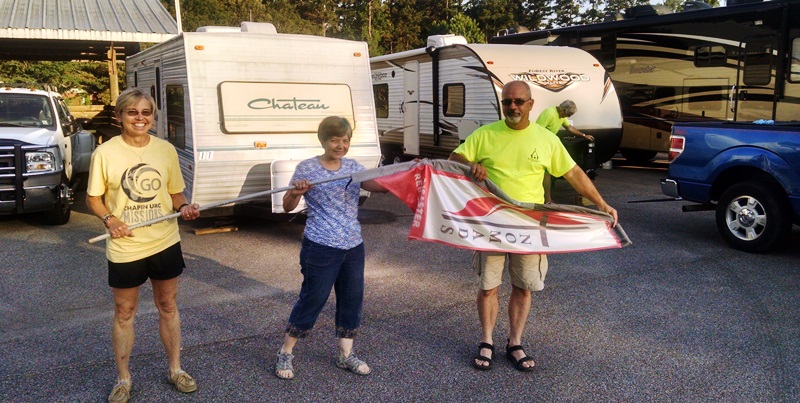 It was another gorgeous day. We had a few clouds as we drove which is not a bad thing for a driving day. No rain. The high today in Tuscaloosa was 96, the exact same as Hattiesburg. It was still very humid.

We did not set an alarm clock today but did get up so we could see our team members off. This week was the last week of NOMADS work in Hattiesburg. They don’t think they will need us anymore until they have another disaster which is a good thing for Hattiesburg. Therefore, the entire team except for Nula left today. Nula is staying another week as a regular volunteer. Hattiesburg was a very satisfying place to work and R3SM is a wonderful agency doing very good work.

First out this morning were Wayne and Debbi. They had the longest drive today and left a little after seven. Carol and Dave left about the same time we did, shortly after 10:00. They were driving a little further than us but they didn’t have a long day either. Del and Peggy was close to ready to leave when we left. They had some black tank problems that Max helped them resolve before we left and we know they are now home safe and sound.  We don’t know when Phil left since he was leaving from R3SM but we just heard he arrived home safely.  His wife should be home by now too.   We heard from Nula and she had a good day after everyone left. She worked a while at James’ touching up paint and the like. Just heard Wayne and Debbi are home so everyone has arrived safely at their destinations tonight.  Thank You Lord!!  Such a great team!

After arriving in Tuscaloosa we talked with some of Mom’s neighbors, did some work and then walked to Cookout for milkshakes. Contrary to what someone may write in the caption, only one of the milkshakes was for Anne. One was for Max and the other for a sweet neighbor. Hope everyone has a great weekend. We will be heading to Blount County tomorrow.