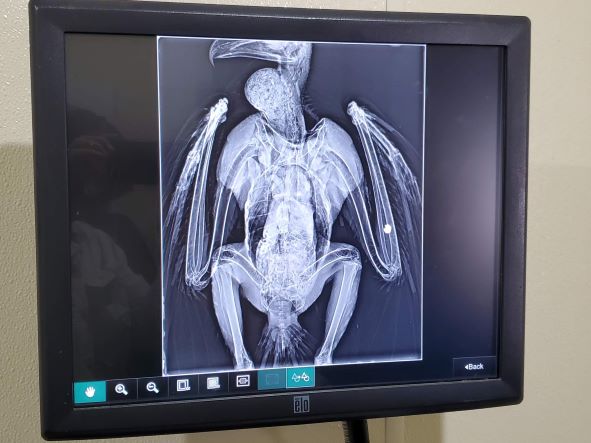 We had a busy week with A Year to Volunteer at Raptor Education Group, Inc. (REGI) but we have also had fun.  Tuesday an injured loon was brought in by the Dept of Natural Resources office and we got to see this beautiful bird up close.  We don’t see loons very often north Alabama so it was a real treat.  There was a tremendous amount of landscaping and cleanup/cleanout done this week along with great progress being made on the three gazebos.  One is now complete and the staff were planning to move one of the birds back into his home today or tomorrow, as soon as they were sure the paint was completely dry.  Looks very good.  The passerine enclosure and storage shed are also showing real progress.  Anne and Max worked primarily on the electrical for the passerine enclosure and landscaping.

The highlight of our week was when the director of REGI allowed some of us to observe the arrival of and initial treatment of an injured approximately two year old male bald eagle.  He was hit by a vehicle while on a carcass beside a road and was found in a thicket nearby.  He was brought in a large U-Haul box.  The director, Marge, was amazing with the eagle.  She simply began to talk to him softly and calmly telling him she was going to take care of him and check him out.  She moved slowly and gently but deliberately all the while talking to him.  The eagle rather than thrashing and fighting relaxed in her arms as she talked and then allowed her to lay him on his back with a pillow under this head and shoulders.  She then very gently examined him with nothing more than regular exam gloves on her hands and her gentle voice.  Part of the time she was holding his legs but she was able to release the legs at times and he never tried to get away and never tried to bite or grab her with his talons even when they drew blood.  (Eagles talons have a crushing strength of over 400 lbs/sq inch.)  Within 10 minutes the eagle had been evaluated, x-rayed and administered vitamin K.  It was amazing and beautiful to watch.   Then the poor guy was bedded down to rest and hopefully begin healing.  We know that Marge and her crew will take good care of him this weekend but we will be anxious to check on him Monday.