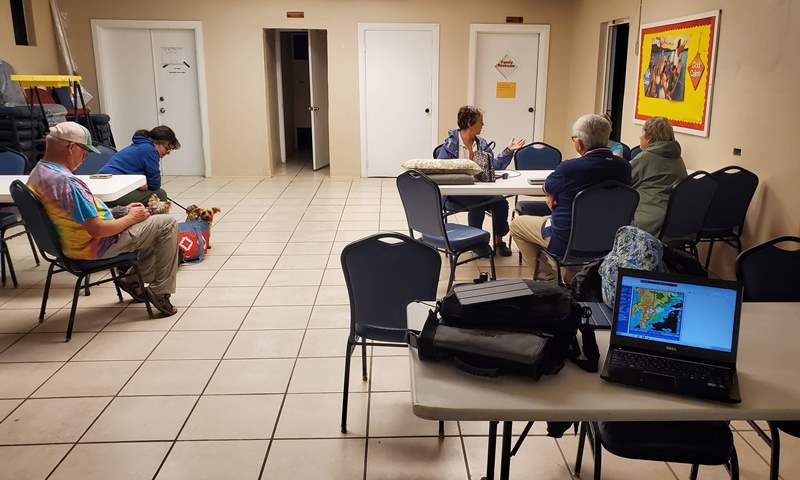 Last night was along night for the team. During our team meeting we learned that our county was placed under a tornado watch. We told the team what to do if we went under a warning and after our work was done we all headed back to our rigs. Max was in storm mode as there was a water spout headed straight toward Key West. Anne went to sleep – for about 15 minutes when we were suddenly placed under a tornado warning. All our team received their phone alerts and all gathered back inside the church as we had requested. Max didn’t think the worst of the storm was going to pass our way and thankfully it did not. When we experience severe weather when we are traveling, we learn how blessed we are with the TV and NWS coverage we have in our area. Since Key West is 150 miles from Miami, the stations there – the closest TV stations – don’t really cover the lower keys. The tornado warning wasn’t canceled until 11:00 but most of the team was so wide awake by then that there was little sleep to be had. Key West received 5.5 inches of rain from the storm and the streets were flooded. We had a lot of rain but no wind damage. This afternoon some of the side streets in Big Pine Key were still under water.

Today Max took Glenita and Steve to Sugarloaf Key to continue work on Bob’s house. Today they hung 2 sets of closet doors, repaired a hole in the ceiling drywall, touched up some paint. The rest of the team – Larry, Kathy, Elaine and Anne returned to Dennis’ house. Larry installed the four new kitchen ceiling lights while the rest of us did the final sanding/prep on the walls in the kitchen and living room. He also did some work on the hall and bedroom drywall. After lunch the ladies, with the help of Dennis, began the priming of the walls. By the end of the day one short section of wall was all that was unprimed. We were very pleased with the appearance of the walls with the primer in place.

Today was Elaine’s birthday and the 10 year old daughter of our homeowner Bob was scheduled to sing at Boondocks, a local restaurant, so the team decided to head to Boondocks after work. Unfortunately the young lady was ill and unable to appear but we all still had fun celebrating Elaine’s day. Since we are all so tired, we made an early night of it and headed home with everyone planning an early bedtime. Hope everyone is ready for Christmas.