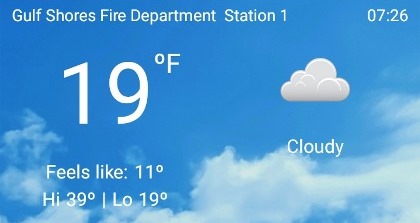 It was a really cold morning. The official low was 19 in Gulf Shores. Our thermometer didn’t go below 23, but that was cold enough. We have been pleasantly surprised at how comfortable we have been living in FRED in these cold temperatures. FRED 2 has better insulation than FRED 1 had and the heat pumps and furnaces have worked great. We have not cleared the antifreeze from the lines yet and have just been using bottled water to flush the toilet and wash dishes etc. We have used the bath houses here at the park as well. The sun was out today but it was after lunch before we got above freezing. Our high was 40. However, they keep changing their minds on the low for the rest of the week so we will wait until tomorrow to decide about unwinterizing. We have waited this long we sure wouldn’t want to do it one day too soon.

While it was 40, we decided to do a little walking around the park. They have made a lot of improvements since were were here last in 2013. We are told most of the improvements have been funded by the BP settlement money. There are new boardwalks everywhere. They are finally rebuilding the old convention center and the bike trails have been greatly improved. None of the projects have been completed but some of the trails and boardwalks are open. Too bad it’s been too cold to ride bikes. We walked out one of the board walks for sunset this afternoon.

The park has begun its winter activities this week. Tonight there was a jam session at the activities building. We decided to go check it out. We know some of our NOMADS friends would have really enjoyed playing with these guys. There were 10 musicians, most of whom appeared to know each other and had been at the park for the winter in previous years. They had 10 guitars, a mandolin, a hammer dulcimer and a bowed psaltery. The music was mostly older songs like “Cajun Moon”, “Wabash Cannonball” and “Margaritaville”. The owner of the hammer dulcimer played a beautiful rendition of “Carol of the Bells”. There was a total of about 30 people in attendance. It was fun and some of the musicians were very good. We haven’t been able to do some of the things we had hoped to do when we planned this little time at the beach before starting our winter projects, but we are having some nice time to just rest, read and relax. Flexibility has been our word for 2018 so far. We will see what tomorrow brings.