Yesterday we checked out of the RV park on Grassy Key around noon and traveled back to Big Pine UMC and rejoined the NOMADS team here. We are back with some of the same team members that we worked with last week and met a two others for the first time. We enjoyed our time off immensely but are also glad to be back with the team.

Today we attended church with the team and then walked for a while enjoying the cool weather. And Dan and Virgie, our leaders for the next few weeks, brought delicious brownies and ice cream for the team meeting this evening.  They brought us up to date on what they accomplished last week at Dennis’s house and we will get pictures for you in the morning when we all go back there to work.  Looking forward to another good week of work.

Monday started really early – 4:00am. Barry, Donna along with Max and Anne left Grassy Key at 4:50AM. We didn’t have to be in Key West until 7:00 but there is only 2 lanes of one highway down to Key West. There are no alternate routes/detours. This was our only chance for the four of us to make this trip this year, and we didn’t want anything like a wreck to keep us from arriving on time. We had no problems and arrived in Key West with plenty of time to spare. We had checked the forecast and knew we were going to have a bumpy ride to the Dry Tortugas National Park so we all took some meclizine to try to ward off any motion sickness. Out boat, the Yankee Freedom III, pulled away from the dock at 8:00. After a very rough ride, we arrived at the Tortugas, 70 miles west of Key West, at 10:30. Thankfully for us none of the four suffered sea sickness but a lot of the people on board were not so lucky. Dry Tortugas is one of the most remote and desirable fishing destinations in the Florida Keys. We, however were not there for the fishing.

After disembarking our boat, we headed straight to Fort Jefferson for our guided tour. Our guide, David, did a tremendous job with the tour. We were amazed at how they built the fort with the tools of the day. It is the largest all masonry fort in the US. The sea was so rough they did not recommend we go snorkeling so we had extra time to explore the island. We had a great time in spite of the rough seas and would certainly recommend the trip. We are trying to see all the National Parks so this is one more off the list.

After returning to Key West ferry port, we headed into downtown. First stop was at Mallory Square for the celebration of the sunset – everyone needs to do this at least once. It was a nice sunset, but not great. The crowd gathered in the Square didn’t care. However, being a Monday evening, the Square was not rocking like it does on the weekends. Next was Kermit’s Key West Key Lime Shoppe. According to Anne and Donna – THE BEST key lime juice for key lime pie. Of course all the wonderful samples were also a plus. Several purchases were made. By now we realized just how long ago 4:00am was so we headed back to Marathon.  Dry Tortugas NP and Mallory Square – two more bucket list check marks!

Tuesday was planned as our Dolphin Experience but since we were able to do that Sunday when the weather was great, today we had a relaxed morning. We did have the energy to go back to Sweet Savannah’s because the Tuesday special cupcake is Boston Cream. One of the best cupcakes we have ever eaten. We also checked in at George’s to see if the dedication was on as planned and in the late afternoon went to Big Pine Key to show Barry and Donna the key deer. We also had dinner at Kings Seafood – some really great Key West pink shrimp. So fresh! To somewhat off set our shrimp and cupcakes, had a nice walk on Coco Plumb Beach, one of Marathon’s public beaches. Weather was cold and winds 25-30 mph so no swimming today, either.

Wednesday, we went to Georges home dedication. So amazing the transformation of the park model in 2.5 weeks. While we have been playing the team has really been working. The counter top in the kitchen looked great as did the completion of the bathroom. Of course, it always looks better when the base board is installed. George seemed really pleased.

Afterwards we went to the National Key Deer Refuge Nature Center so we could get our National Park passports stamped. While back on Big Pine, we went back down to blue hole but the weather was still too cold and windy for the gators to make an appearance. Maybe Donna and Barry will see some gators when they go back through the everglades on the way home. On the way back to the RV park, we stopped to find a geocache and saw the Curry Hammock State Park nature trail and took a nice hike. In the afternoon we were walking around the RV park and down by the sea wall, it was amazing the quantity of sea grass that had been blown in. There was no way to use the boat ramp. Never seen anything quite like that. For our sunset today we visited Sunset Park in Key Colony Beach. Different experience. The people of the community gather every afternoon with their wine and other assorted drinks, watch the sun go down and join in singing their song about Marathon Key. They handed out copies of the song so visitors could participate as well. We had prettier sunset today and the entire experience was interesting.

Thursday – our last day with Barry and Donna. We started our day with a bike ride on the Grassy Key Trail while we were waiting for the day to warm up a bit. We road the great bike trail to a big park along the water in Marathon. It was a great eleven mile ride. We planned to kayak at Curry Hammock State Park, but the attendant at the gate said there was still a small craft advisory and the state park couldn’t rent them. We checked the Weather Service web site and didn’t see any advisory, but knew it would do no good to argue. Very disappointing because we were not going in the ocean. We were going to do the tour of the mangroves. Not to be deterred, we went to the Crane Point Hammock, hiked, found some geocaches and spent a really nice afternoon outside. We visited the hammocks from land instead of by water. This afternoon’s sunset was viewed from our very own pier at the RV park. Nice.

Friday – Early this morning we said goodbye to Barry and Donna as they started their journey back to Alabama. It’s been a great few days that passed way too fast. Safe travels and we will see you again soon. Our plans for the day changed because it rained. Not predicted! So today was a stay at home day for laundry, work and walking in the park. Tomorrow it’s back to Big Pine. What a wonderful week! 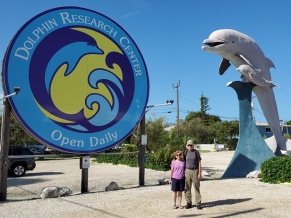 We almost hate to say it, but it was absolutely gorgeous in the Florida Keys today. We cooked breakfast for Barry and Donna and our selves and then we decided to walk over to the Dolphin Research Center which is about a block from Jolly Roger. We had reservations for the dolphin encounter on Tuesday but the weather is not going to be as nice so we were able to change the encounter to today at 12:00. This was amazing. We were in the water with the dolphins and able to give them commands to ask them to jump and spin or splash water. We could have them shake hands with us, and give us a kiss. We were able to rub their backs as they swam past and the big bucket list item, we swam with them and held on to their dorsal fin while they pulled us across the water. So cool!! Such beautiful animals and so very smart!

The tricks the dolphins are taught are not only to entertain the visitors, they also keep the dolphins in good physical condition.

The trainers trained us to interact with the dolphins with hand signals.

Of course, the highlight of the day was each of us being pulled through the water by a dolphin.

After our time in the water, we could go to the various other pools and educational areas to learn even more about the dolphins. Anne was able to talk to some of the trainers who worked with the dolphins medical issues. Today they were working with some of the dolphins on learning to us a nebulizer. Yes, like the giving yourself or your child a breathing treatment, nebulizer. The big difference with dolphins is that since they breath through their blow hole they have the big doughnut looking device that sits over the blow hole while they breath in the medication. Today they were just teaching them to do this while they are well with no medicine in the nebulizer so that if they were to ever need at treatment for a fungus or some other illness they would have the skill to use the nebulizer. Pretty amazing. We all four had a wonderful day at the Dolphin Research Center!

Of course a day of fun with Barry and Donna is never complete without ice cream. Late this afternoon we drove into Marathon to Sweet Savannah’s ice cream and cupcake shop. Key lime ice cream for Anne and Donna and salty caramel for Barry and Max. So good. We may have to go back Tuesday when the special is Boston Cream cup cakes. It was a very good day. 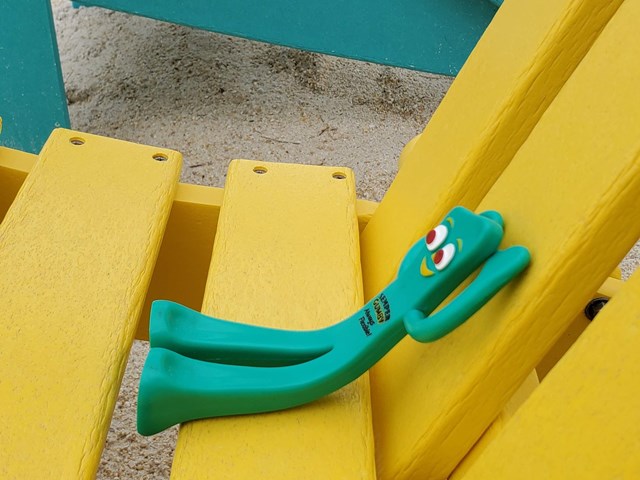 Today was our first day of Sabbath. We know we need to take breaks and after leading the last several weeks, it is time for a break. We purposely had nothing scheduled today. We did have things to do but no schedule. We did some laundry and cleaning and then headed back to Marathon for groceries. On the way we saw sign for Coco Plum Beach and decided to check it out. We found a nice public beach in an out of the way place and will take Barry and Donna back there. Should be a nice place to walk on the beach and maybe okay for sunsets. We also passed a sign for Curry Hammock State Park. Researched it and we will probably go there later in the week to rent some kayaks and tour the mangroves. After surviving a very crowded Publix we headed back to Jolly Roger to await the arrival of Barry and Donna. They arrived about 3:30 and we spent the rest of the afternoon and evening catching up. So good to spend time with our dear friends. We walked the park, went to the beach and just enjoyed ourselves. It was a very good day.